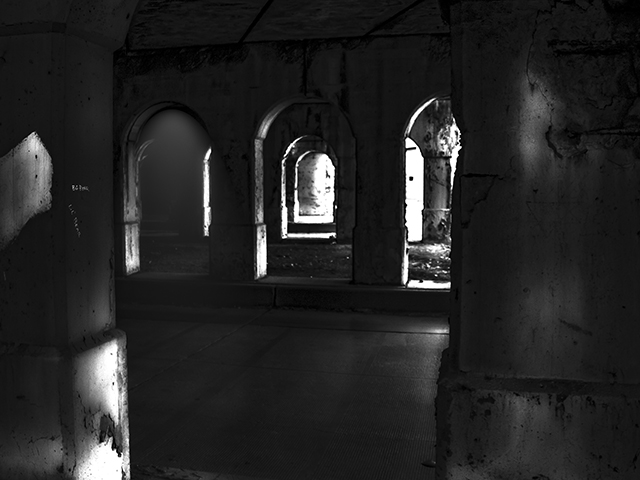 I’m in Chicago, it’s chilly, getting dark, and I’m under a very long underpass in a somewhat gross part of town.  It’s dimly lit down there but I’m getting the shots I want. Because it was light out my eyes are still not used to the contrast, so I’m not 100% what I’m shooting but I’m 100% that there’s probably about 4-5 homeless people who live there keeping an eye on me.

I’m not frightened, usually these people just want  to be left alone when they’re in their own ‘home’, or at most,  they hope you’ll give them money so that they can buy provisions pay their doc that day.  (That’s my affectionate term for ‘Drug Of Choice’…I like the idea that street drugs should be called ‘doc’ so that I can make fun of the crap we peddle out of our hospital doors half the time.)

This was part of a series that I did called ‘the light’ which was all about the play of light and dark in confined spaces and ‘the light’ at the end of the tunnel.  I began shooting this group of pictures after my father died.  He was in the hospital in Texas but I was in Chicago.  I drove myself and my two cats down to Texas to live in his space and help care for him and keep him company in the hospital.  When I first came to see him, it was late at night and I had just arrived in Mission (south tip of Texas, literally 3 miles north of Mexico).  I was astonished at what I saw.

A little background story here:  My father was in Texas and after my mother died, he began to date a woman that he was head over heels in love with.  I loved that he was happy.  My father, while with this woman, beat stage 4 lymphoma, chemotherapy and radiation…and he nursed his kidneys back to health and was one of those few lucky souls to get off of dialysis after being on it for a while.

In other words, he was a fighter…not much would take him too far down and he seemed to do great with her at his side.

He eventually became sick again and it turned out that he needed dialysis once more.  He drove himself to and from dialysis without incident for months.  Huntil one day when he got home and was too weak to get up out of the car and to the front door. I asked over and over if I should come down when he was admitted and he insisted that he was in good hands and visiting with Girlfriend all day kept his spirits up just fine.   During this time I did keep in touch with Girlfriend as well as the hospital staff who never once let on that there was any sort of wasting process like what I was seeing.

This was a man who was caring for himself at home prior to the day he entered that facility.  He had started dialysis, and had complained to his primary doctor (the worst doctor in the world and one who I still consider daily suing) about the itching who just laughed it off and didn’t even bother to look at it.  Consequently, both Girlfriend and Father and their respective homes were infested with scabies.  Father probably got it while at the dialysis center.

One day after dialysis, Father came home and was really weak. He was  unable to get from the car to the front door, so trim and petite girlfriend called 911 who took Dad to the worst hospital in the world.

Fast forward to three weeks later where I found him:

His 6’1 inch frame lie in the crummy hospital bed uncovered and curled up in a fetal position.  He had wasted away to nothing and he seemed to have scratches and sores all over his arms and legs.  Upon further inspection, he was actually scabbed where he had been scratching at the scabies which had gone untreated since before his admission into the hospital, some 3-4 weeks earlier.  The final straw was the fecal material dried to him from God only knows how many days prior and the cold, wet bedding he was lying on top of.  I was a little furious but in an effort to not upset him, I got up close to him and whispered ‘Hi Daddy’ to him until he heard me and began to come to and open his eyes.

Suddenly, he sparkled just a little tiny bit.  ‘Well Hi, Neat!’.  Then he told me that he was dreaming about that train again, (he used to work for the railways) at the end of the tunnel, the one with the light that he kept seeing.  He knew that if he could ‘just get on that train’, everything would be ok.

Immediately following, I heard from my Dad that he was afraid of the nurse duty on that night…’he’s a little rough’.  That means he’s downright abusive…my father is not afraid of anyone.  So while I was there, I forced the laziest nurse in the world to get up off his butt at the desk and to help me change the linens and clean my father

The next day, Dad shared more about that light.  He was positive that he ‘saw the light at the end of the tunnel’ that they talk about.  I was positive that if I had been one 12 hour shift later he would have been dead before morning.

Incidentally, I had him moved from that cesspool of infection and laze to another only slightly better facility.  At this one things were a little more managed, but still the patients were lost in the bureaucracy of health care and very little actually got done on a day by day basis.  Although, lots of this happened. And a lot of this too.  Don’t forget THIS.

I’d love to say he got out and I was able to care for him at home…until he improved and his spirits got better and he was able to put the horror of of the long hospitalization behind him…but sadly, he finally gave up his fight on June 23rd,  2009.  What a crummy ending to the story, huh?  Well, death is a part of life, it happens to all of us.  As surely as we’re born, we will die.