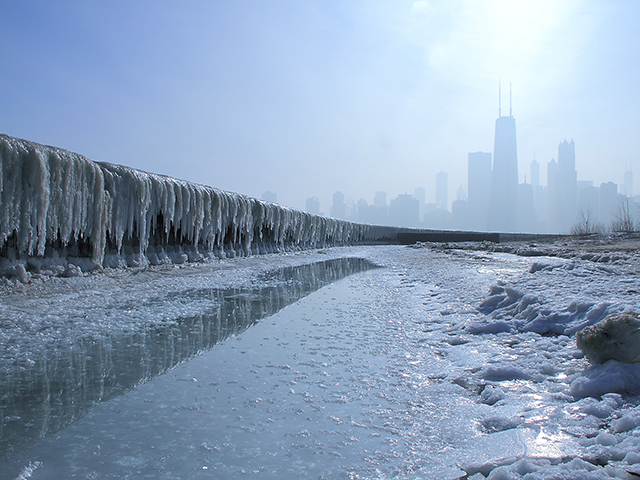 Sometimes things just don’t look like you think they should.

I often wander around Chicago and take photos.  Many end up being fodder, but while I’m on ‘walkabout’ with my camera, I am learning new things, new angles, better ways to set up my lenses, so really, no shot is wasted.  And even if I’m not learning something great about the camera, I might be learning a very valuable life lesson!  For example, I once learned that just because it looks like snow, it might be a thin sheet of ice covered with snow over the lake.  Did that sink in yet?

Fortunately I only went in up to my calf.  Both calves.  Fortunately I lived close enough to the lake that I didn’t have frostbite by the time I got back home. I never made that mistake again!

This time, it as about 45 degrees, and delightfully balmy for Chicago in February.  I could see the ice was thin beneath my feet and could also see that there was nothing but sand under it.  Actually, the ice was melting so it was about as slippery as…well…ha-ice.  I was doubting my decision as I didn’t have to learn that ice is hard and if you drop your camera on it you’re likely to destroy at least the lens.  If you slip and fall on it you might break a bone.  These were lessons that I already knew and didn’t need refreshers in.  I was the only person near the lake front out in the area that I was in.  There were other photographers out there, it was a lovely ‘springlike’ day and we’d been cooped up all winter in the cold or in 20 layers of clothing.

To say I didn’t doubt myself about where I was headed would be a lie.  I kept thinking I should abandon all searches for good images from that vantage point. I was somewhere near North Avenue Beach, and making my way out further toward where this pier met the water’s edge.

I was so focused on walking without wiping out that didn’t even notice how rewarding my view was about to be.  Once I got to a point where the water would have soaked my feet, I then looked.  Aimed my camera at the John Hancock Center and began to shoot.

Oh, by the way?  This photo was chosen to be featured in a Long Island digital gallery in July of 2013 for the ‘Exposure Expo’ put on by See Me.