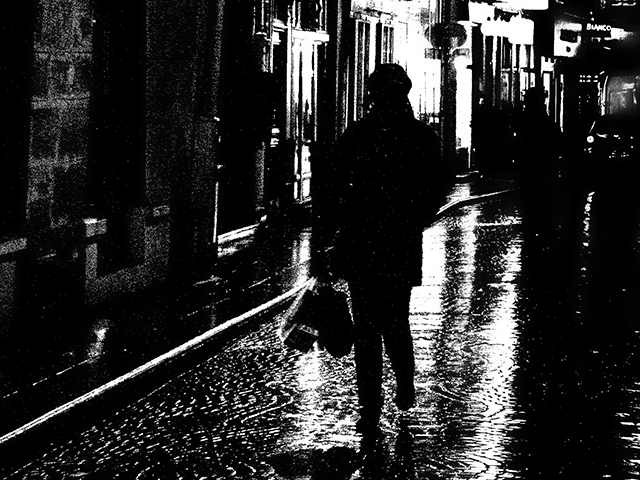 It was a rainy evening in Paris.  The wind was blowing and there was a certain chill in the air.  I didn’t really have a plan, I didn’t really have  a goal.  I had a camera.  And two feet, a warm jacket, and gloves.  I had a waterproof bag that disguised the camera as possibly being something other than a camera, like the typical clutter of a typical woman’s bag…whatever those two entities are…

I  had no idea where I was, despite the fact that I had a map in my bag with my camera.  The map was about as useful as the camera in deciphering which way I should go had I wanted to go somewhere specific. The map broke the city up into it’s different arrondissements (of which there are 20, and they’re not arranged in exactly a ‘grid formation’) and the streets within those different sections run all sorts of directions, straight not really being one of them.   If I’d had a map of the entire city, I could have followed the streets easily and had half a fighting chance at picking a route to…somewhere…but no, this map I decided to buy for it’s ‘handy inconspicuous profile’ didn’t have such a thing.  Just a bunch of different pages that had streets veering in all different directions off one page and onto another page only to bend one way or the other and then veer off of that page too, often practically the opposite direction from where I’d started five pages ago.  (Maybe it just seemed like that because I was new to the city and didn’t bother to really look at the map until I decided I wanted to be somewhere)

I suppose all the speak of maps and directions and veering streets is inconsequential here.  As I said, I had no plan, no goal.  So not such a big deal really.  I was just walking, looking, then walking some more (in a different direction).  As it began to get darker and more lights came on to fill the darkness and more darkness existed than light, I vaguely wondered if Paris had any bad neighborhoods.  I booked this one last minute and didn’t take any time to research it in my effort to seek adventure.  I thought I’d go on my instincts for this one.  That was a great idea until I was out there in the dark in streets that veered into obscurity and I had no choice but to stop and look at a map like a tourist in the dark trying and figure it out.

I decided that I was ready to head back to my hotel so I just stopped all wandering and sat in a cafe for a bit while studying my map.   It turned out that all that veering and confusion on my part had just led me in a meandering circle (probably mimicking the arrangement of the arrondissements) and I was about three blocks from where I wanted to be.

Feeling renewed and refreshed (and yes, warmer,) I set out once more with renewed confidence.In my first few minutes outside of the cafe, I found a dark street street, and now, I was sure, not only was it a safe area, I also knew how to get back to my hotel from the main street.  So I wandered down the street a ways only to realize that it quickly became dark and I decided there wasn’t really much to see there in the dark.  Right before I could turn around and leave the darkness, though,  I heard the click clack of footsteps behind me.

They were steps that were too heavy to be a woman’s, and too hurried to be someone completely unconcerned.  It had started to drizzle again and  now backed myself into a dark space.  I sped up.  He sped up.  I switched to the middle of the street .  He switched to the middle of the street. Finally, after continuing like this for about another 25 yards or so, I spun around on one heel and faced him.

Well there he was-in all of his fearsomeness.  A hurried shopper without his umbrella probably worried about his new clothes getting wet. I laughed at myself for my silliness.  I do have quite the imagination, but it’s not very often that I allow it to take control and prevent me from thinking clearly.  Maybe I was in such a ‘safe’ area that my mind fabricated reasons to stay sharp.

I was so relieved I pulled out the camera and snapped a picture of my ‘stalker’.  I only got one shot before he was past me (without so much as a second glance at me, of course) but once I was on my own in that location, I noticed the fine textures of the city as it glistened with rain water.  I walked back the way I had come, this time feeling very grateful for my eyes and for the rain and for a would be stalker that has no idea to this day that I am writing about him.