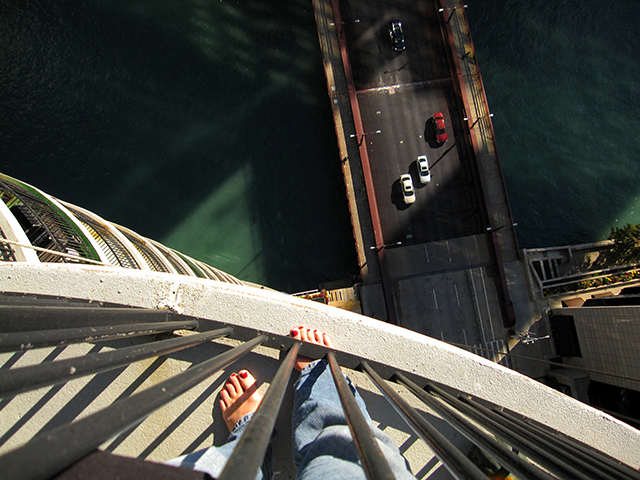 I was fortunate  to live in Marina City for about 8 years total while in Chicago.  This photo was taken from my second unit in the building.  While not even close to the nicest condo I stayed in while there, it was by far the most fun.  I had the best neighbor who introduced me to people in the building who I hope to always remain friends with.

From this southwest facing 33rd floor balcony, you can see the Dearborn Street Bridge (and yes, it’s a ‘moveable span bridge’-cool! ) and the Chicago River (and yes, we changed the flow of the river to suit our needs…well not ME exactly, but THEY.).  I loved the view straight down the building from that apartment, I wasn’t high enough to feel completely removed from the rest of the city like I did when I lived up on the 56th and above floors, but high enough so that I could still get a neat view over things.  I didn’t realize it when I shot this how nicely my toenails lined up with the cars and the balcony rails to create a second diagonal line to cross Dearborn Street, but once I saw it, I really liked it.

Ok, I have to quote WIKI here because it IS really interesting, and though I’d heard of this ‘river reversal’ thing, I’d never bothered (in the 20 years I’ve lived here) to actually learn much about it:  Sort of embarrassing since our river along with Lake Michigan is actually memorialized on our flag by the two blue lines on the edges!

“The River is also noteworthy for its natural and man-made history. In 1887, the Illinois General Assembly, partly in response to concerns arising out of an extreme weather event in 1885 that threatened the city’s water supply,[2] decided to reverse the flow of the Chicago River through civil engineering by taking water from Lake Michigan and discharging it into the Mississippi River watershed. In 1889, the Illinois General Assembly created the Chicago Sanitary District (now The Metropolitan Water Reclamation District) to replace the Illinois-Michigan Canal, which had become inadequate to carry the city’s increasing sewage and commercial navigation needs, with the Chicago Sanitary and Ship Canal, a much larger waterway.[3] The District completed this man-made hydrologic connection between the Great Lakes and Mississippi watershed in 1900 [4] by reversing the flow of the Main Stem and South Branch of the river using a series of canal locks, and increasing the river’s flow from Lake Michigan, causing it to empty into the new Canal. In 1999, this system was named a ‘Civil Engineering Monument of the Millennium’ by the American Society of Civil Engineers (ASCE).[5] The river is also noted for the local custom of dyeing it green on St. Patrick’s Day.”