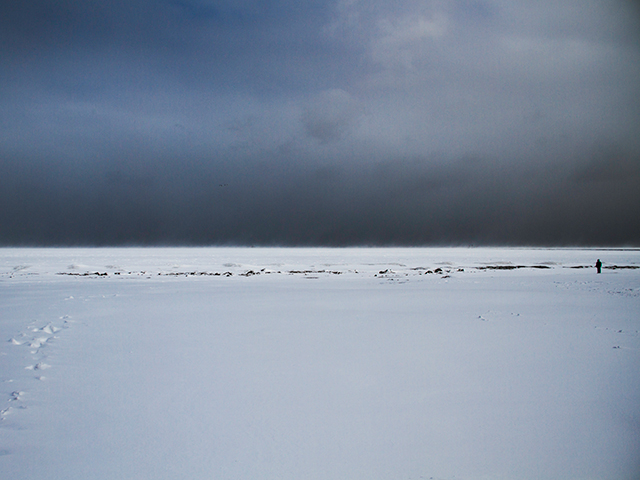 Ok, to all Chicagoans, the REAL title of this ‘snowstorm’ was the ‘Snowpacalypse of 2011’.   This snowstorm came on with such ferocity that despite warnings, cars drove Lakeshore Drive and got TRAPPED.  Many, including CTA busses ran out of gasoline sitting on the northbound lanes of this expressway trying to get away from the loop as the snow just continued to pile in around them and bury them.  People had to walk and find their way away from their vehicles to safety…many of them still wearing office clothes.  (Over the next 2 -4 days these cars were removed as it was possible, and towed to area lots where drivers could come and reclaim them.)  See a video of the aftermath HERE (and notice the dog and it’s owner playing at minute mark 1:23)

Despite the obvious gloom in the photo that I took, what struck me the most about this storm was that the day afterward, the city was effectively shut down.  Hospital staff stayed up to 24 hours to cover shifts because they couldn’t get home and nobody could get to work from home.  City crews worked 24 hours a day trying to clear the situation. If you owned a tractor with a plough or a truck with one, you had lots to do. But, everyone else?  They took the day off.

In the 18 years that I had lived in Chicago, it was the first time I ever heard full-grown adults out playing in the snow and laughing and having fun like children.  It was phenomenal and because of that remains one of my favorite events that I’ve ever experienced while living in this city. The sounds of laughter and enjoyment rang up and down the lakefront and there was no traffic or siren noise to drown it out.  Surreal and beautiful.