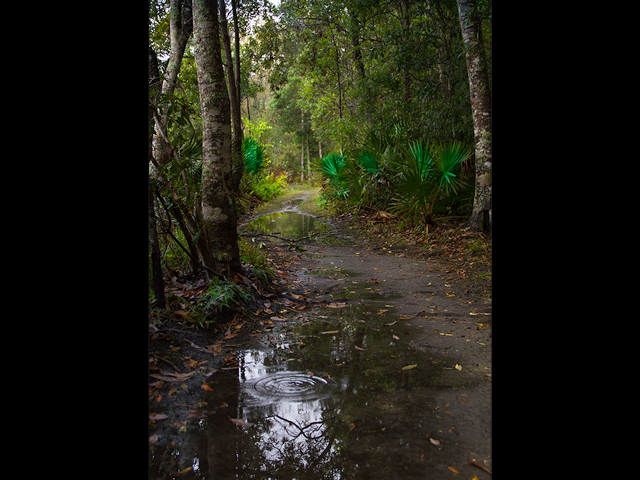 In  February of 2012 I drove to Florida for a few reasons.  One reason was to see my brother who lives near Tampa, and to see my friend who lives near Daytona. Of course two other reasons included taking pictures and getting the heck out of the dismal Chicago winter for a while.

The drive there was pretty unremarkable, and  when I got to by brother’s new home, it was beautiful outside.  However, by the next day the rain settled in and stayed.

The rain was actually quite fitting though, to tell you the truth.

Literally the first day I was at my brother’s, my best friend Christina told me during a phone conversation that she had just been made a hospice patient.  I didn’t understand her at first, I thought she was telling me that she had just gotten home from the hospital (after a year riddled with so many visits to the hospital and admissions while battling cancer that I lost count, I wasn’t surprised to hear she had just gotten home again).  When she corrected me that she said hospice and not hospital, I had nothing to say.  Of course, I wanted to say, ‘Well, you’re a nurse, how long do you think you have?’  but I’m a nurse too and I know there’s no way to really answer that question ever.  When she said, ‘When you get home, will you come see me?’ of course I said yes.
The next day, I left my brother’s and headed again south, with the intention of reaching Miami to look for some sunshine, photos and spend one day prior to stopping at my Daytona area friend’s home.  Somewhere along the way I stopped and walked this reserve area in the drizzle. I told myself it was to take photos, but in reality, I just needed to stop and clear my head with no traffic, road hum, or people around.  I did get this photo, but not much else as my heart just wasn’t in it at all.

The rain continued to follow me every single place I went while I was in Florida and it was relentless. It even stayed over me as I made my way home.  It was a very frustrating for driving, and I made awful time, but it was fitting for my mood.  As hard as I tried to outrun the frequent downpours and thunderstorms, I just couldn’t get out from under that  cloud.

In retrospect, the rain (which I’ve always purported to love) was probably trying to steer me home faster to see Christina. It was probably there to say ‘go home today’ instead of continuing south and trying to find silly sunshine. Well, I couldn’t have known, but I really thought I’d see her in a coherent state at least one or two more times.  I did not expect her to be so completely close to death and so heavily medicated by the time I got home to see  her that she may not have even recognized that it was me holding her hand that last day I finally saw her.  She died two days later.

I love the pathway winding through the scene here.  It helps to remind me that nothing really dies…Even the rain livens up my scene here by creating a great ripple pattern in one puddle.  I like that I was her friend and that I knew Christina.  I’m glad for her life.   Her life makes me smile.  Sometimes it even makes me laugh.

Maybe sometime I’l share some of our crazy stories with you.  But not here, for right at this moment, they’re mine to remember fondly.