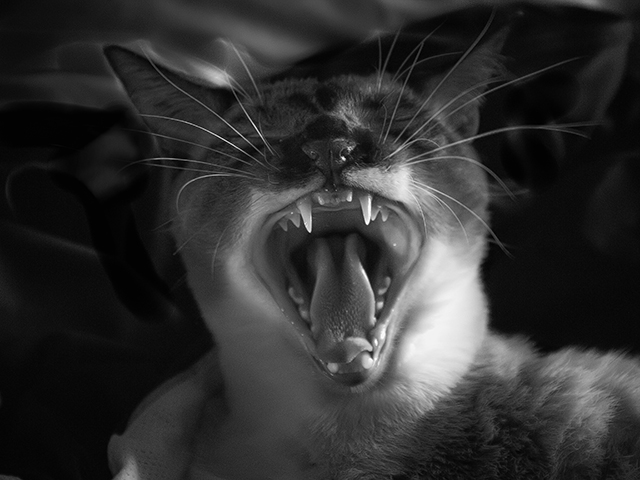 Ok, he has a name…it’s Willow.  When I got him that was his given name already.

I tried various name changes.  First Fang (for obvious reasons), then Shark (for his sleek, athletic ability and to offset my little kitten who I could then call guppy), and very briefly to Simon (because I thought it sounded sophisticated).  No matter how many times I changed the name though, eventually I fell back into the old habit of calling him Willow and finally I went with it. He’s a slim Siamese mix of a cat, and pretty willowy, so it works.

This is one cool cat.   Not in the everyday cool cat type of cool, but in a very special way of being cool.

The first time I saw Willow I was surfing one of those tear-jerker animal rescue sites called ‘I’ve had an awful life and now I’m about to be ‘euthanized’ down the hall from this dirty little cage if you don’t rescue me’ or something equally as horrible. You know those pages, they show pictures of animals, after having been tortured and starved and having been brought back from the brink of death with the intent on uniting these sweet things with their ‘furever’ homes?  Yeah, ‘furever home’.  I use the lingo.  What about it?   Usually the images are accompanied by a narrative that makes you wish you could stab your own eyes out rather than read on because the thought of these animals  with their big wet teary stares and quivering noses having to go to their death alone and scared is just too much to bear.  And you know you could just look away but you can’t quite bear to do that either.

Now, don’t get me wrong, I think these save animal sites are great.  I hate animal abuse, I deplore animals being abandoned, and even if it’s no fault of the owners, I cry inside at the idea of animals being ‘euthanized’ when they’re not really sick.  That seems like a human failure, not an animal one.  Why put the animals to death? Anyway, that’s not something I’m going to cure here. Human stupidity is and always has been an unexplainable force throughout history.

Back to Willow.  I was browsing through pages of animals when I  saw Willow.  He was pictured in a cage, crouched low and with ears flattened, every single muscle tensed.  I bet that if I had been able to listen to him while that photo was being taken, I would have heard that low-pitched guttural growl that cats emit when they’re terrified.  Despite the obvious distress, his beauty was remarkable.  His bright blue eyes, though wild at the time, pierced right off the page and the colors in his coat were exquisite like a Siamese type cat should be.

I read on and discovered that he was about to be ‘euthanized’ in 2 days if he wasn’t rescued. He was an owner surrender for some reason. But he was in Florida.  Florida!  I live in Chicago!  However, I have friends in Florida, and Willow was located near Orlando, right where one of my friends lives.  I contacted Stan that night and asked him to do a favor for me, and then I called the animal shelter and told them to expect a visit from my friend to pick the cat up.  2 days and probably a bunch of money later, (poor cat had fleas and worms from the shelter, so Stan took him to the vet right away-Thanks Stan, I owe you someday…dinner in Greece?) I was on a flight from Chicago to Orlando first class to pick up my new best friend and take him to his…urp…furever home. I used a bunch of my frequent flyer miles intended to take me to some exotic overseas trip to go to Florida instead and pick up a cat. What can I say?

Our first night in the hotel room was rocky.  He was disoriented, frightened, and just wanted a quiet place.  I let him hide in the cat carrier all night and didn’t bother him. The next day, in the cat carrier in the rented car back to the airport, he began to meow and try to squeeze his nose through the one corner of the carrier that I had failed to adequately zip tightly.  Man, this cat is strong!

After finally getting him into the airport, and dropping the car off, we had to go through security.  Can I just say that you do not know joy until you go through airport security in the USA with an artificial hip and a scared live cat?  They literally made me hold him barehanded over my head (he wriggled and clawed the entire time he was up there) walking through the scanner as his carrier went through the conveyor belt X-Ray machine.  Once it was decided that neither the cat nor I was a terrorist, (thankfully we escaped any bomb sniffing dogs, Willow would have been glued to  the ceiling of the airport or I would have lost digits) we got onto our airplane and were able to get comfortable in our nice business class seat.  His meowing settled down, and eventually, he was quiet.  Once back in Chicago, the El ride home was fairly unremarkable other than all the people who wanted to see the terrified kitty who kept meowing as if I was an abusive mom.

So, there you have it, the story of my Prince Willow and his first class journey across the country.

We would later go on the road and drive from Chicago to Tucson, and then to San Diego and back to Chicago, but that’s another story.