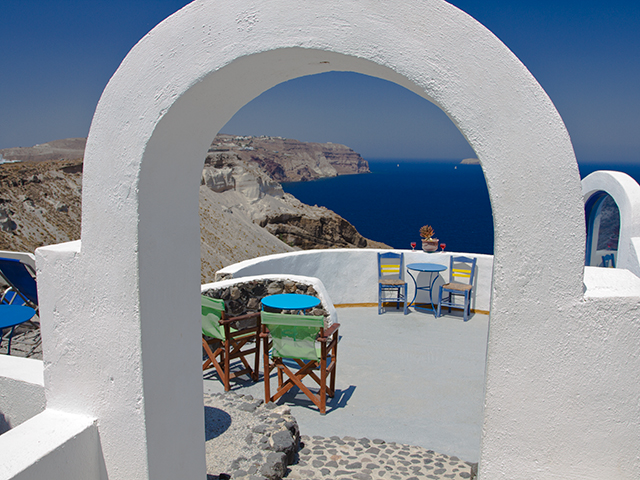 I’ve always been sort of a sucker for any type of view that offers the perspective of looking through a keyhole or a tunnel into it. There’s something about that almost voyeuristic feel I get when I take the shots and then look at them later that is really appealing to me.

This is on the beautiful island of  Santorini in Greece. I suspect though, that you already knew that…it’s a pretty iconic place.

The sun was blazing down on me as I shot this (I was riding by on my rented quad runner) but the breeze up that high on the island was a thing of beauty.  Not a single uncomfortable day was spent on this island.

The scenery is spectacular, the food incredible, and the climate simply divine.  I do not exaggerate. You only have to look as far as a simple Wikipedia link to read about the island and it’s charm.

Anyway, back to this photo…it would have been great to sit there and have a few glasses of wine with friends and soak in the view, but this day I was on my way to take a little boat ride to the three ‘colored’ beaches of the island.  There’s a white one, a red one, and a black one.  Maybe there’ll be some photos coming up of those excursions too.